Of all the incredible banksias we’ve featured, the banksia integrifolia, commonly known END_OF_DOCUMENT_TOKEN_TO_BE_REPLACED

Acacia cognata or acacia limelight is one of the best-selling wattle cultivars, END_OF_DOCUMENT_TOKEN_TO_BE_REPLACED

Grevilleas are a favourite in gardens across Australia, and it’s easy to END_OF_DOCUMENT_TOKEN_TO_BE_REPLACED

Indoor plants are a great addition to any indoor space. Whether it END_OF_DOCUMENT_TOKEN_TO_BE_REPLACED

Known for its fantastic, fern-like foliage and wide-spreading growth, the banksia Blechnifolia is ideal for Australian gardens. Considered a dwarf-spreading plant, Blechnifolia plants can add a touch of excitement to rocky and drought-tolerant gardens.

Here’s how you can propagate, grow and care for the banksia Blechnifolia. 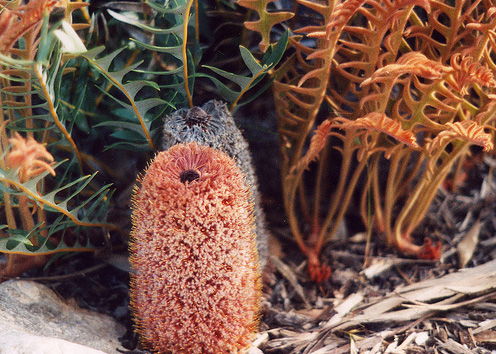 The blechnifolia, or Southern Blechnum Banksia, forms part of the Proteaceae family and features some really fantastic foliage.

While there are over 75 different species of Banksia which grow naturally across most western parts of Australia, this variety is one of the few which has no underground root stock and grows wide rather than tall.

As such, it has also been afforded the name ground cover banksia. On average, the blechnifolia will only grow as much as 0.5 metres tall, but one plant can reach as much as 4 metres wide.

The ground cover banksia Australian native is best known for its fantastic blooms, which flower in spring and range from red, pink, orange and brown.

When it comes to the landscaping applications, banksia ground cover varieties like the blechnifolia are fantastic as they take up a lot of space, offer eye-catching flowers and require fairly little care.

This variety of Banksia is great for erosion control and can be used as a ground cover, feature plant or even a border plant amongst your flowerbeds.

Another great benefit is that the banksia ground cover produces nectar-rich blooms, which will attract a range of bees, butterflied and nectar feeding birds to your backyard.

How to Grow Banksia Blechnifolia 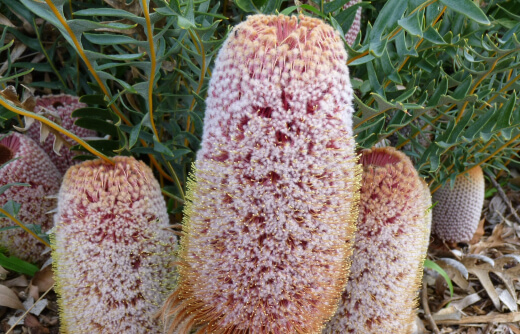 The blechnifolia species is particularly hardy and once established grows well when left alone. While it is possible to grow in a container, it’s a fiercely spreading plant so growing in your garden will be your best option.

Of course, when propagating, you’ll need to start in a pot before transplanting into soil.

Propagation of southern Blechnum Banksia is most viable through seeds, as seeds are readily available, and germination only takes a few weeks. You can also propagate using a stem-cutting, but this method is far more difficult.

How to Propagate from Seed

Growing blechnifolia from seed is by far the easiest and cheapest method. Seeds are usually readily available from existing plants. Plus, they remain viable for an extremely long time. Here’s what you’ll need to do.

Germination will take place within 3 to 6 weeks. Try to keep your seedling in a semi-humid, bright area while germinating.

How to Propagate from Cutting

This method is not as widely used as it just not as successful as propagating from a seed. It’s also important to note that it is illegal to remove cutting from banksia plants in the wild, due to the devastating dieback issue Australia is facing.

However, if you have a blechnifolia growing in your garden and like a challenge, you can:

It’s recommended to try a few cuttings at once, as not all of them will root.

Where to Grow Banksia Blechnifolia 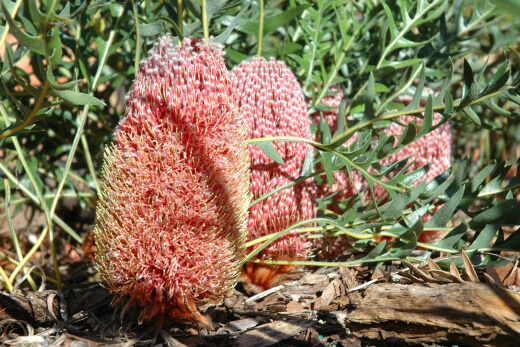 Ground cover banksia grows in a variety of environments and is particularly frost-hardy. In general, it’s recommended to plant your blechnifolia in a courtyard, at the poolside, in coastal gardens or in rocky terrains.

As with most banksia species, this variety loves a lot of sun. Try choosing a spot which gets almost a full day of sun.

Blechnifolia plants love gritty soil, so sandy or loamy soil is perfect for ideal growth. In general, they prefer saltier soil to try to maintain a soil PH level between 5.5 and 7.0. 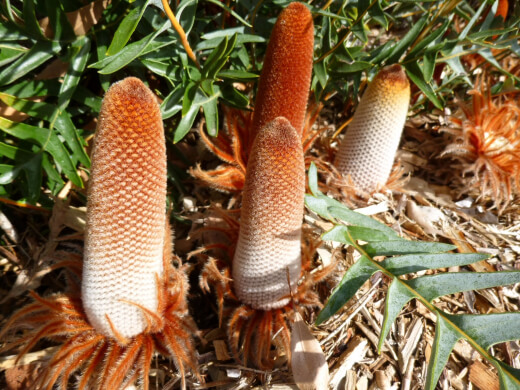 How to Care for Banksia Blechnifolia

Once established, there’s not much you’ll need to do to keep your blechnifolia happy. You’ll only need to regulate occasional watering, annual fertilization and periodic pruning.

How to Water Banksia Blechnifolia

Once your ground cover banksia is established, it won’t need much watering. If it’s the rainy season, you can cut back completely. If it’s a dry season, water only once a week.

The blechnifolia is particularly drought-tolerant, so don’t worry too much if you forget to water it.

How to Fertilize Banksia Blechnifolia

It’s recommended to use a slow-release fertilizer at the time of planting. Try a fertilizer which will last at least 8 to 9 months. Thereafter, consider fertilizing every other spring.

Be sure to avoid any fertilizer with phosphorous, as it can pose deadly for banksia plants.

How to Prune Banksia Blechnifolia

As with most Banksia varieties, pruning should mainly be done to maintain plant size. Removing old plant cones will also promote frequent flowering. 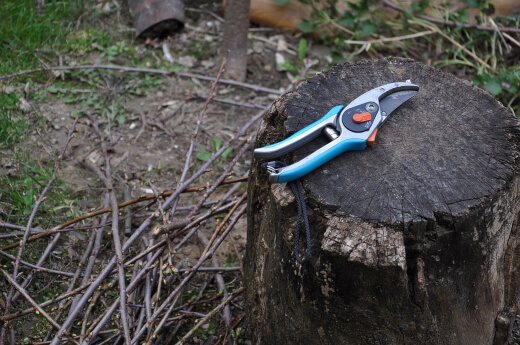 How Long Does Banksia Blechnifolia Take to Flower?

It’s blooms are one of the most attractive features of the Southern Blechnum Banksia, however it will take some time for them to begin flowering.

This variety will take 4 to 5 years post planting to begin flowering.

While pests are not a common problem, the blechnifolia variety is prone to scale and dieback.

To manage scale, cut back any infected leaves. Use a rubbing-alcohol or neem-oil to help prevent the spread and rub regularly on twigs.

Cinnamon fungus, or Dieback, is becoming a major problem for the ecology in Australia. Dieback not only affects the plants but also spreads into the soil.

Phytoclean is one of the only registered, effective treatments for cinnamon fungus, however, it won’t be effective on curing your plants.

Should you suspect your plant of having a dieback issue, remove the plant immediately and burn it to avoid spreading the disease to other plants. Then clean your hands, clothing and shoes thoroughly with Phytoclean to further contain the spread.

Banksia ground cover really is a fabulous addition to any garden. Your Blechnifolia won’t need much attention, as long as you ensure it’s got some gritty, well-draining soil and plenty of sunlight to keep it happy.

Striking and exciting, the banksia blechnifolia is the best ground cover around. Start growing yours today and enjoy beautiful blooms in a few years’ time! 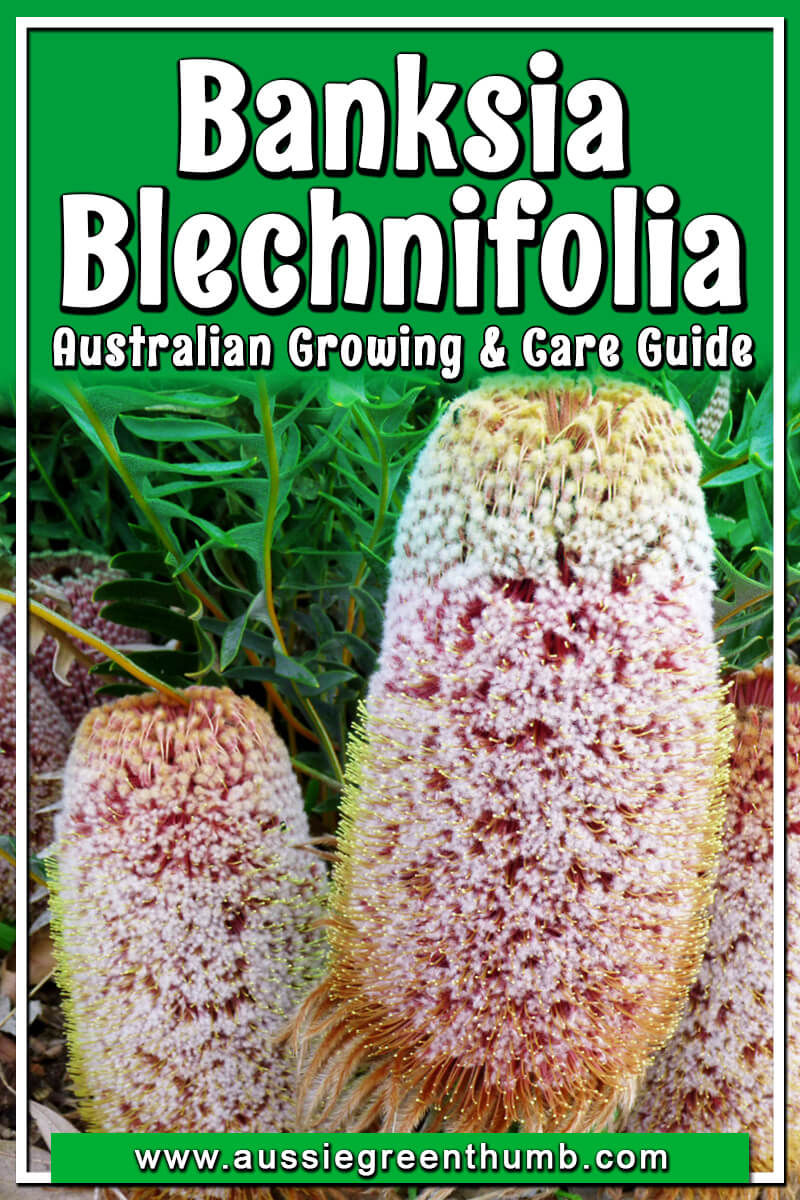 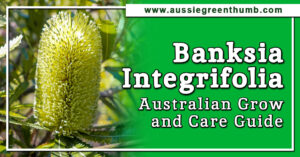 Of all the incredible banksias we’ve featured, the banksia integrifolia, END_OF_DOCUMENT_TOKEN_TO_BE_REPLACED 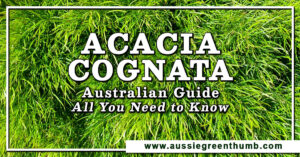 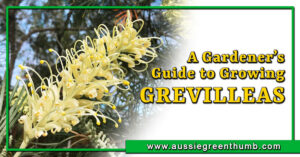 Grevilleas are a favourite in gardens across Australia, and it’s END_OF_DOCUMENT_TOKEN_TO_BE_REPLACED 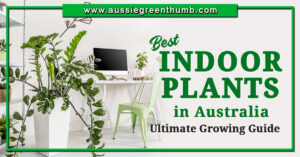 Indoor plants are a great addition to any indoor space. END_OF_DOCUMENT_TOKEN_TO_BE_REPLACED