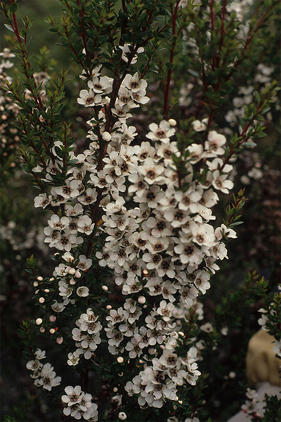 This variety prefers positions with full sun but will tolerate partial shade. Due to the area it is endemic to, the turbinatum is actually quite frost tolerant which makes it also good for cooler climates.

Leptospermum turbinatum will also handle a healthy prune after the flowering season, which is spring. However it may be best to light prune it in summer and then prune in more vigorously in early Autumn if you live in an area that experiences hot summers.

A very similar variety is the Leptospermum nitidum, which is endemic to Tasmania. In fact, for many years the turbinatum was thought to be one and the same as the nitidum until it was recently discovered to be a slightly different variety.

They both grow in similar environments and so could both be chosen equally. As such, I’d suggest you go with the variety which is endemic to your area, or whichever comes from the closest place to you.