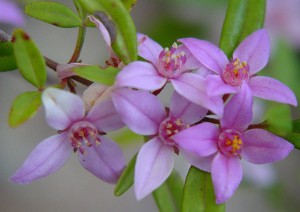 There is not an awful lot of information available on the Boronia telopea species however I will provide you with what I can. I wanted to feature this variety, even though it is similar to the fraseri, because I really like the simple contrast between the light pink flowers and the bright, light green leaves.

Being a hybrid, there is no specific naturally occuring location, however the telopea has been proven to grow well on in cool to temperate climates on the East Coast of Australia. Testing in tropical area’s has been limited.

This variety is generally quite hardy, able to survive mild frost and mild drought conditions. The Boronia telopea also responds really well to regular pruning and shaping. In this variety, as in many, regular pruning really does encourage it to grow more densely.

I couldn’t what sort of garden position would be best for the telopea, however I would plant it in a position that is at least part shade as most Boronia’s I have grown have required some shade to really thrive.