Propagating Monstera is a really great way to save money on houseplants, and a brilliant experiment to teach kids (and adults) about the science of plants. Monstera, or the Swiss Cheese Plant, is one of the easiest houseplants to propagate, making the most of your indoor greenery.

I’ve been propagating Monstera as gifts for friends and family for years (I’m pretty sure I’ve given someone the same gift at least three times, but he still seems to appreciate it).

I hope this how to propagate monstera guide helps you double your stock, whether you just want a few more plants around the house, or the full drama of a green wall. 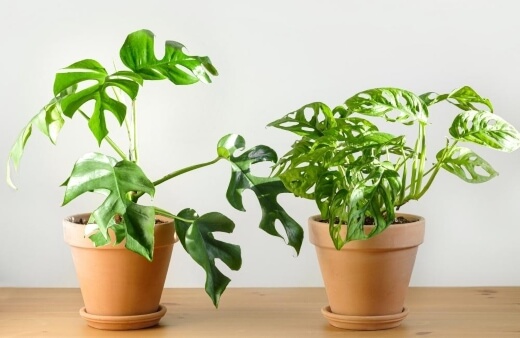 Monstera are a tall, epiphytic, tropical plant, commonly grown as houseplants all over the world. Their leaves have distinctive holes dotted around their edge, that in older leaves can have more area than the leaf itself, giving it its name – Swiss Cheese Plant.

As epiphytes, they are often sold attached to moss poles, as their aerial roots will attach to the natural fibres and support the plant, making it an incredibly easy houseplant to look after.

Understanding the Parts of Monstera plants

Every part of a Monstera plays a role in its growth, and every part of the Monstera is important for cuttings. From their leaves to their roots, you need to understand what role each part of the plant plays in helping it develop new roots, as well as how to make the most of the parent plant. 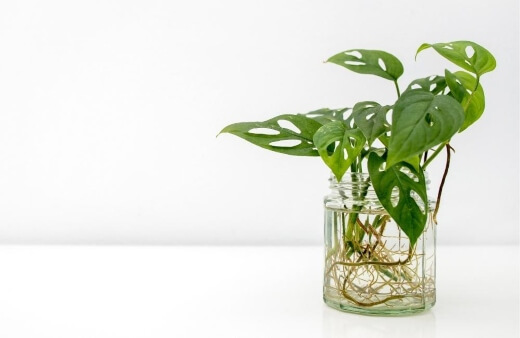 How to Propagate Monstera in Water

To propagate Monstera in water, it is absolutely essential that you use rain water or filtered tap water. The chemicals in tap water can kill young cuttings which are not even remotely built to withstand the additives in our water system.

Just like your tools, your water should be clean. Monstera takes 14-21 days to form its first new roots, and as long as you change the water 1-2 times per week, you can keep them in a vase or large jar for up to three months before potting them on.

Alternatively, after around 2 months, you can pot them straight into potting compost with a good mix of compost and bark, but there’s no need to rush, and personally, I think there is a great beauty in watching the roots as they establish themselves, and feed the abundance of new leaves that start to grow as soon as the plant is happy.

How to Propagate Swiss Cheese Plant in soil

To propagate Monstera in soil, follow the steps above, but pay more attention to watering. The advantage of propagating directly in soil is that your Monstera cutting will grow true soil roots from the start, and you won’t need to pot on for at least a year.

The disadvantage is that it is much more likely to rot. The water roots grown in the water propagation method are an adaptation shared by many houseplants.

They grow wispy roots that are perfectly adapted to water, and only rot if the water is left to go stagnant. Soil propagation requires regular watering, but not overwatering which can be a tricky balance. 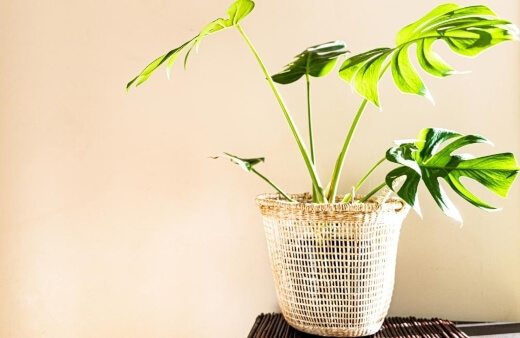 Air layering is a genuine hack for propagating soft stemmed houseplants and makes for much stronger plants. Air layering Monstera basically tricks the plant into thinking it has found soil half way up its stem.

By wrapping sphagnum moss around a cut in the stem, and keeping it moist, the plant will put out true roots rather than aerial roots in that place.

How to Take Rooted Cuttings from Monstera

Firstly, make sure your plant is ready to be pruned. Taking cuttings from a young plant won’t be successful, and you might damage your original Monstera while taking cuttings.

Make sure your plant is at least 1m tall, with internodes (stems) that are at least 1cm thick. One way to be certain is if the stem you plan on cutting has aerial roots. 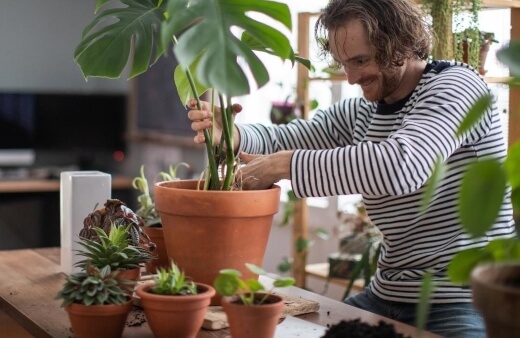 If there are roots appearing from the stem, you can 100% take cuttings, but if not, it doesn’t mean it won’t work, it’s just slightly less developed.

Cutting from new growth in the centre of the plant will help maintain the shape, and also bush it out providing more stability.

Where possible, cut to a node so you know that the plant will create new leaves from the cut point, and try to include an aerial root on the cutting as this will help provide water to the cutting while true roots develop.

Using a sharp pair of clean scissors or secateurs, cut the Monstera at a 45-degree angle. Less than 45 degrees, and it has less space to take on water.

More than 45 degrees, and it is more likely to rot as too much Cortex (the plant’s equivalent to our muscles, making up the bulk of the stem) is exposed to disease and infection.

Before rooting your Monstera cutting, remove any dry sheathing as it is likely to rot away in water. The sheathing is the part of the plant that new leaves emerge from, and is essentially an old split node.

On the parent plant, they will drop off when they are ready, but any messy brown material on the cutting should be removed.

For propagating swiss cheese plant in water or soil, trim aerial roots by half. The trimming will promote new root growth.

Some gardeners advise cutting the root off entirely, but I prefer to leave some root in place to help feed the pant in the first few days. If you plan on using tap water, cut the full aerial root off. 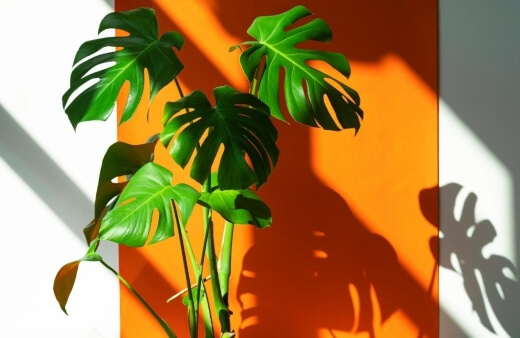 Best season to take a cutting

Always propagate Monstera in spring or summer while the plant is actively growing. Propagating in winter can lead to two things: roots not growing due to dormancy; the parent plant not healing the cut.

Propagate Monstera in bright, but indirect light, similar to the parent plant (see our guide to growing Monstera Deliciosa for onward growth advice). Keeping Monstera at the higher end of their preferred temperatures will help too.

The heat will promote faster growth, but slowly reducing temperatures after rooting will help with stronger slower growth, once the initial roots have formed.

When watering Monstera, particularly when propagating from water alone, it is essential to use rain water, or filtered tap water. Normal tap water is far too harsh for young plants, and while it is possible to propagate Monstera in tap water, it is not advised and results will be unreliable.

While the plant is rooting, mist it at least once a week, or keep it in a warm bathroom. Humidity is essential, as like any rooted cutting, its biggest risk is water loss through its leaves (transpiration).

Misting keeps the leaves healthy, and reduces demands on the young root system. As with other watering, rainwater, or filtered water is best.

Whether you are propagating in soil, or potting into soil after water or air propagation, it is best to add perlite and orchid bark to the potting mix to make sure it is well drained, especially in its early days, while the young roots are more susceptible to rot.

Depending on how you plan to propagate, there are a few things you’ll need to buy. For water propagation, all you need is a pair of secateurs and a vase, for soil you’ll need a good growing medium.

For air propagation, other than the sphagnum moss, you probably have everything in your kitchen already, but we’ve compiled a few links to useful sites where you can buy the basics: 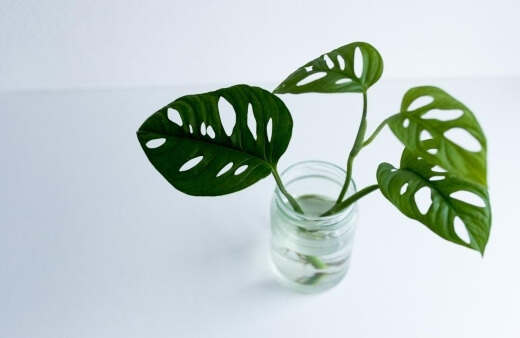 Tools for Monstera Propagation in Water

Tools for Monstera Propagation in Soil

Common Problems When Propagating Monstera (and How to Avoid Them)

There are only two real common problems faced by Monstera cuttings, bugs and burns. Neither are fatal, but need attention as soon as possible. Our quick guide to both below should help you avoid them and fix them if they do happen. 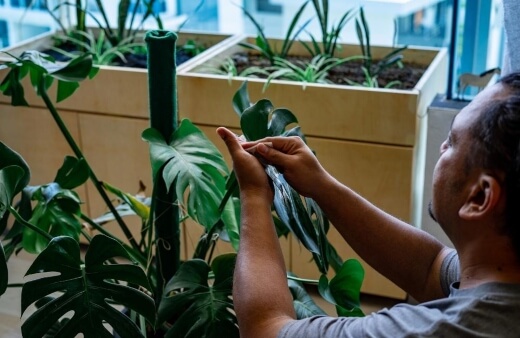 For a more detailed guide on Monstera pests and diseases in adult plants, see our guide to growing Monstera Deliciosa here.

How to avoid root rot when propagating Monstera

One reason root rot develops, even if you follow the above advice, is incorrect light and heat. Funguses develop in dark, damp conditions, so placing your cuttings in warm but indirect sunny spots should help give you a regular watering routine, and minimise the risk of root rot in your cuttings.

The easiest way to avoid root rot is to stick to propagating Monstera in water. The roots adapt quickly to submersion and grow roots that are resilient and immune to root rot, but you still need to water properly when it is potted up after propagation.

How to avoid leaf burn in Monstera cuttings

Monstera cuttings are young plants, and just as delicate as any other seedling or cutting, despite their size. Keeping away from direct baking sunlight will protect them from leaf burn, which can not only damage the look of your houseplant cutting, but also stop it photosynthesising properly.

Simply keep them out of direct sunlight, but don’t starve them of light entirely. They might like dappled shade but that doesn’t mean they’ll grow in a cupboard. 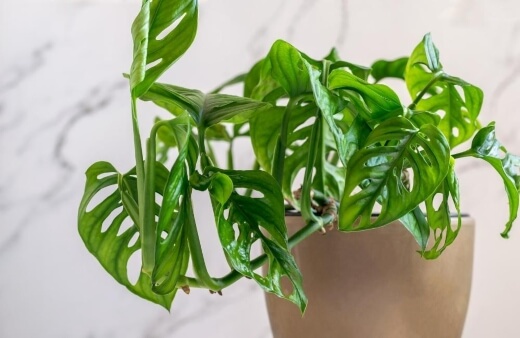 Is soil or water better for propagating Monstera?

There are two traditional ways to propagate Monstera, and both have almost exactly the same process. I much prefer to propagate my Monstera cuttings in rainwater, as propagating in soil tends to be less reliable, and can have more complications, including the rather illogical root rot, which in practice is more likely in soil than water.

Can I use tap water to propagate Monstera?

No, it is not advised to use un-filtered tap water on any houseplants, especially not Monstera cuttings.

Is soil or water better for propagating Monstera?

Propagating Monstera in soil can simplify the process and produce stronger plants, but has higher risks of disease. Propagating in water is more reliable, but has more steps.

Neither is better or worse, but read above to help you make an informed decision.

What is a rooted cutting?

Plants have the ability to change their cells, so rather than healing like-for-like as human skin does when we have a cut, they can be encouraged to grow roots from their stems when they sense a less to their water supply.

What is an aerial root?

Aerial roots are primarily anchoring. In some places they also feed from humidity to support the plant’s water intake.

Start Propagating Monstera in Your Home

Remember that propagating Monstera requires light, water and heat. Getting the mix of those three things right is all you need to make a success of it.

Whatever your reason for wanting to propagate Monstera, it’s got to be worth a go! I hope I’ve managed to convince you that propagating Monstera from cuttings is a great and straightforward way to make new plants for free. 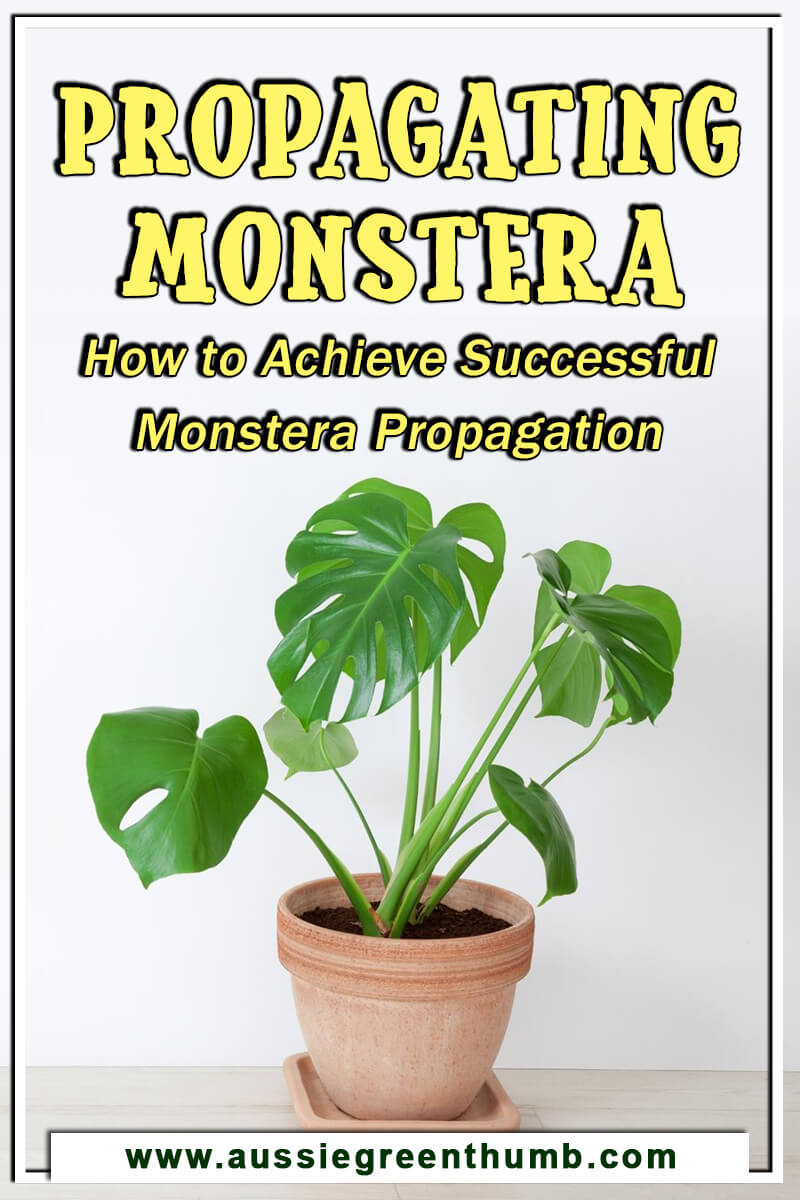 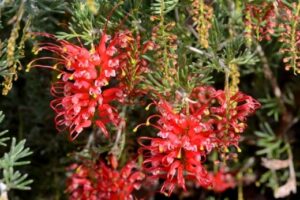 The Grevillea seaspray or Grevillea preissii is a fantastic, smaller END_OF_DOCUMENT_TOKEN_TO_BE_REPLACED 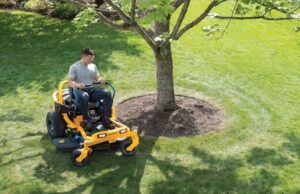 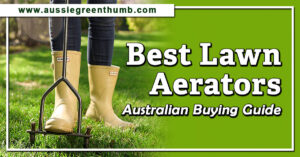 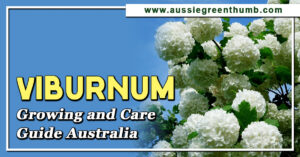 Often known as the joy of plants, the viburnum, Viburnum END_OF_DOCUMENT_TOKEN_TO_BE_REPLACED